There are a number of different types of bar code languages (symbologies) to satisfy varying applications and print requirements. The listing below provides a brief description of some of the most common bar code languages:

The UPC-A is most widely used and most recognized symbol in the United States. Its primary usage has been for product identification in the retail industry.

This symbol has a fixed length of twelve numeric characters. The data encoded within a UPC-A conforms to a standardized format The twelfth digit of a UPC-A symbol is a calculated check character computed from the eleven prior numbers. UPC-E

Whereas the UPC-A encodes 12 numeric characters, the UPC-E only codifies 8 numbers. These symbols are referred as “zero suppressed”, since they actually represent a condensed version of the twelve data characters of a U.P.C..

All other countries aside from the United States utilize the EAN bar code for identification on retail goods. The symbol is identical to the UPC-A with one exception, the EAN bar code represents thirteen numeric characters instead of twelve.

Code 3 of 9 (also referred to as Code 39) is a very common bar code language which can represent alphanumeric characters of varying length. The start/stop characters for Code 39 symbols is always an asterisk (*).

Code 128 is a very compact and versatile language which allows the encodation of the entire 128 ASCII character set. This symbology is self-checking and is designed with geometric features to improve
scanner read performance.

This language is a variation of the Code 128 symbology designed primarily for product/shipment identification applications. The UCC/EAN-128 specification uses the same code set as Code 128, however a special character (function 1) is used as part of the start code in the symbol. In addition, UCC/EAN-128 symbols utilize standardized application identifiers (AI’s).

The Postnet (POSTal Numerical Encoding Technique) bar code was developed by the US Postal Service to encode ZIP code information on letter mail. Postnet symbols differ from other bar codes, because
the individual bar code height alternates rather than the bar width.

Pharmacode symbols are primarily used in packing control systems. This language only encodes numeric data with values ranging from 1 – 8190.

Retailers often require that bar-coded UCC-128 Shipping Container Label labels are affixed to incoming shipments. Prepared in association with a valid ASN transmission (advanced ship notice, or 856), UCC-128s connect the physical units of the shipment to the electronic information.

When a shipment is received, your trading partner scans the label and electronically matches it to the information in the ASN file. Labels follow a specific format and must contain accurate information. In addition, they must be legible, scan able, and associated with an ASN. Labels that do not meet these specifications may be assessed a chargeback, or expense offset fee. 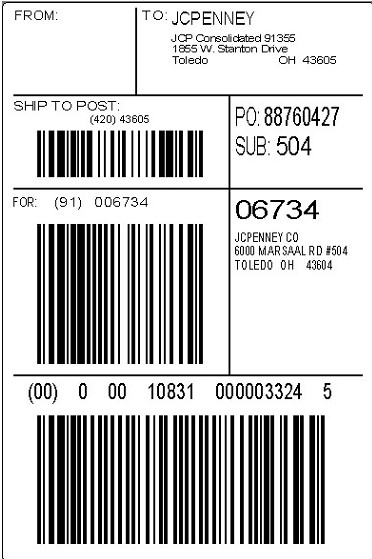